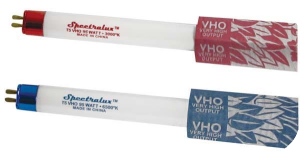 The biggest and the most important difference between HO and VHO bulbs are their lumen output and watt intake – to the VHO lamps have almost double the watt intake and about 2/3 more lumen output. For example if we take a 54 watt HO T5 bulb its lumen output is typically around 5000 lumens, but comparable lamp in the VHO version would be one with 95 watts but also with lumen output up to 7200 lumens. So every grower needs to figure out if he or she want to spent more money one the electricity and the lamps themselves, because these VHO ones are also a bit more expensive, but they get higher lumen output. This higher lumen output is great but because these VHO bulbs are running so hot and with so much electricity they are less efficient than regular T5 HO bulbs and basically if space is not an issue then regular High output ones are far better!

As you can see there is 17 lumen per watt difference between these bulbs and that means that with 54 W of regular High Output T5 lights you can get 5000 lumens but if you compare 54 W from VHO bulbs you could only get 4092 lumens.

Another downside of the VHO lamps is the lifespan of them. Because they have higher lumen output they run out much quicker. So you will need to replace them more often (around once every 4 to 5 months on average) which is inconvenience itself not to mention the cost of a single bulb.

These VHO lights also have a bit different color spectrum so if you would want to use the HO and the VHO ones at the same time you would need to determine which color temperature combination would be best for your garden.

The upside to the VHO bulbs is the light penetration, because it is much better that the HO ones have. Because of this deeper light penetration the light made by VHO bulb would be more efficient therefore better for the plants. But then again you would have to be careful with the heat because if the lumen output and wattage is bigger then they produce more heat and you can’t put them as close to your plants canopy and so you will need a bigger grow room and bigger ventilation system.

But because the VHO ones still are T5 lights the light spread of them is very even and good because the whole bulb radiates the light. Because of this even light spread there isn’t any chance of any hot spots or other  bulb failure possibilities that could result in uneven plants or damage to some of them.

And there also are a variety of color temperatures for these VHO bulbs to choose from  based of the manufacturer of each of them, so they better than any other grow bulbs can provide the best light for each growth stage of any plant.

And although there are some negative aspects of them they are quite popular between aquarium owners because they can give you all the light spectrum you need for your fish, corals and rocks without the bulky light fixtures with a lot of bulbs that can look overwhelming over a small aquarium.