What exactly is color spectrum ?

A color spectrum is the measurement of wavelength of the light that is produced by a specific light source. Basically none of the artificial light sources can produce light evenly across all the wavelengths (colors) and the only thing that can produce even spectrum light is our star – SUN.

Why light spectrum is important to plants?

This light wavelength size is important to plant because not all of the visible light is equally beneficial for photosynthesis. All plants that photosynthesize have these photosensitive cells called photo-pigments and they are responsible for turning light energy in a different form that is usable to them. Almost all plants produce carbohydrates from water and carbon dioxide and light is the energy source that fuses these molecules together releasing oxygen and creating chemical energy. These photopigments are in different sizes and shapes and they take in only a specific wavelength light photons. Because of this each individual photo-pigment is capable of producing energy from light in a specific wavelength and the frequency of these special photosynthetic cells (chlorophyll a, chlorophyll b, bacterio-chlorophyll-a, beta-carotene) is not evenly distributed. The greatest concentration of these photosynthetic pigments are at the both ends of the visible light spectrum where the blue and red light is found.

This means that plants use mostly the light energy in the red and blue light spectrum and other frequency light particles are not effective in producing chemical energy! In the diagram below you can see that the plants use the 400 to 500 nanometer light and the 600 to 700 nanometer light the most and the light in between these two spikes is not used that much.

The PAR or the photosynthetically active radiation is the portion of the light that is beneficial for the photosynthesis process and it is from 400 nanometer to 700 nanometer of visible light with the exception of the green light (510 nanometer). Plants don’t use all light equally as I explained earlier so every light source that produces light  will have some light that is not used in the photosynthesis process and this is a big drawback as some portion of the light will not be used by your plants and you will be wasting electricity producing unusable wavelength light. In general all artificial lights have some wavelength peaks and valleys and fluorescent lighting is not an exception.

T5 light are primary made in two color spectrums and they are 3000K and 6400K but there are brands that make 2700K, 5000K ,4000K and 6500K lights. After reading the article to this point you should be familiar with the color spectrum light outputs and why they are necessary for plant growth, so here are two graphs with 3000K and 6400K T5 grow light spectral outputs: 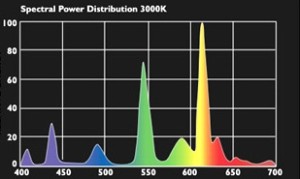 In these two graphics you can see the two main T5 grow light configurations. The first image is with the 6500 K spectrum and there is clearly a bigger spike in the blue wavelength spectrum than in the second image, but the second graphic however has the Yellow-Red spectrum spike that is necessary for the flowering phase of any plants growth. As you can see comparing the photochemical efficiency chart with these ones there are some overlapping spikes but in general a big part of the light produced by fluorescent light tubes is not completely usable. There is also the green spike in both T5 light configurations and that is completely useless as plants don’t use the green light and that is why we perceive them in the green color.

In general it is a good practice to give any photosynthesizing living thing a mix of both the 3000K and 6400K bulbs so a 8 light fixture would ideally have four 3000K bulbs and four 6400K bulbs. But you can change these numbers depending on the plant and the growth stage, for example six 6400K lights and two 3000K light for the vegetative growth stage and six 3000K, two 6400K bulbs for the flowering phase.

There are also 4000K and 5000K T5 grow lights and if you can find one it could be an additional benefit for your garden as in most cases this light would have slightly different color spectrum lines and that means more divers light for your plants.